The Philodendron Birkin is an upright philodendron with medium to large waxy leaves. Juvenile plants will have more solid green leaves. The variegation tends to get brighter and more pronounced on the new leaves as the plant matures.

I’d call it an uncommon plant, and the Philodendron Birkin is a relatively new species. It was a spontaneous mutation of a Philodendron Congo Rojo that was then propagated to be grown and mass-produced. If you can find one, it will make a stunning addition to your home.

Let’s get started with everything you need to know about Philodendron Birkin care! 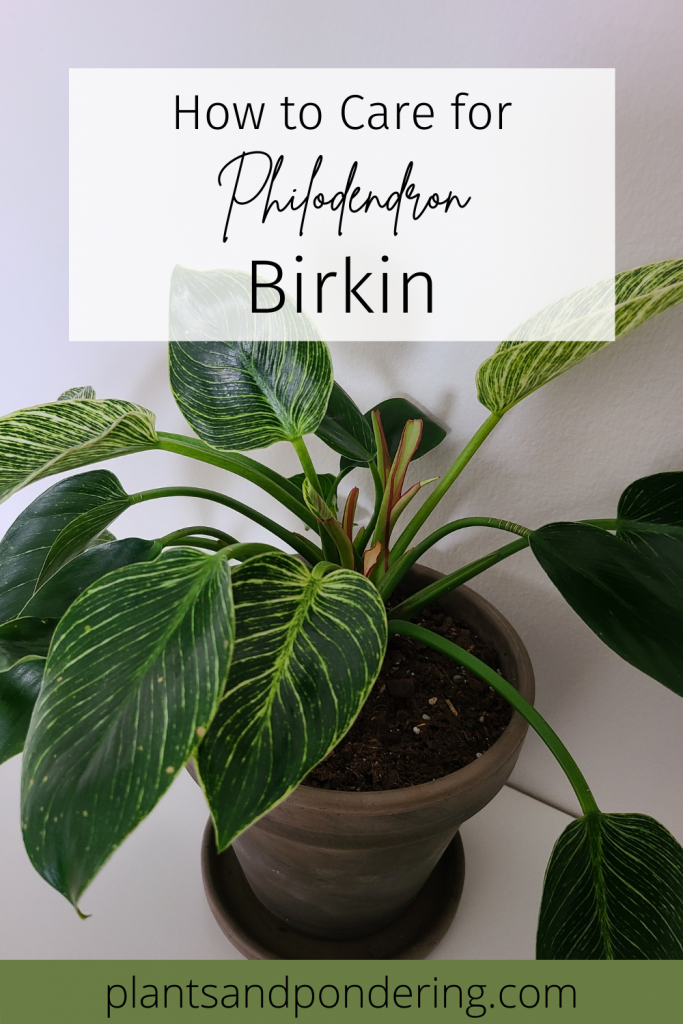 If you’ve ever looked up some information about your plant, and then forgotten it immediately, this care sheet is for you. Plants all have different needs. Keep track of the various requirements for lighting, water, and other things; as well as any other notes you want to take.

Print out copies for each plant you have, and create your own plant care binder! All of your information will be easily accessible in one place.

Like most houseplants, the Philodendron Birkin does not like to be overwatered. Wait for the top inch or two of soil to dry out before watering.

I’m a big fan of the ‘once a week’ schedule because this is what works best for my plants and me. You also don’t want to overwater in terms of the amount of water you’re using. The soil should be thoroughly soaked, but not so much that water stays pooled on top.

If you tend to pour too much water, I highly recommend using pots with drainage holes. This will allow excess water to come out and prevents the plant’s roots from drowning. You can find my Birkin’s pot here. 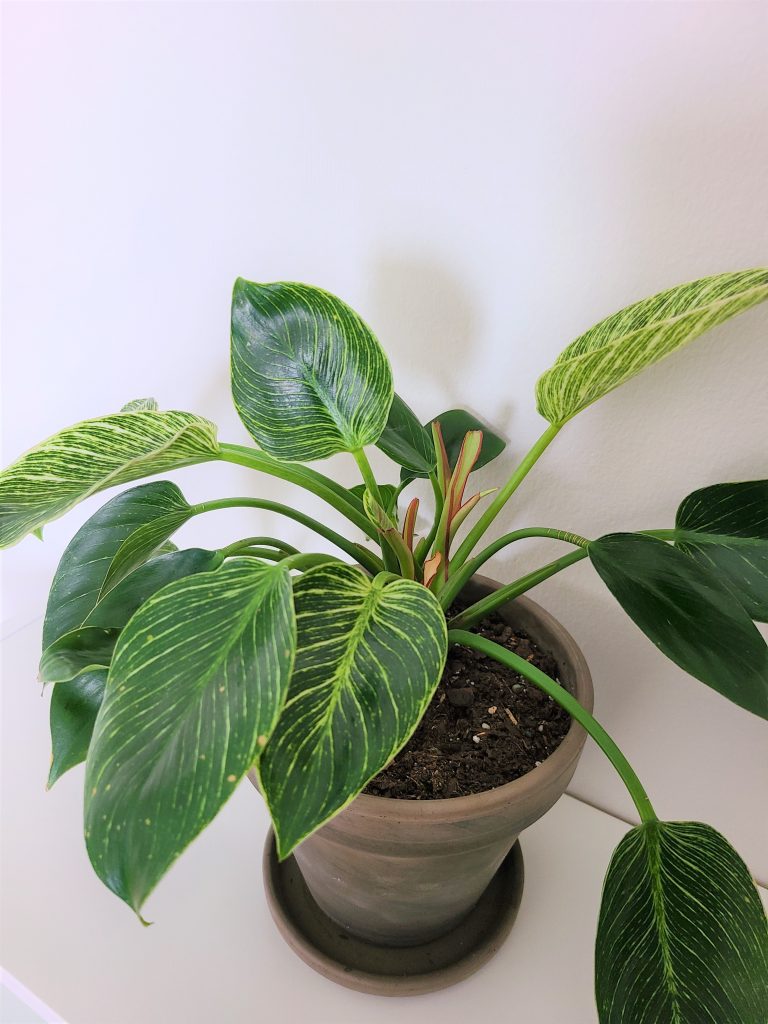 Time for some honesty! I have my Philodendron Birkin in the same soil that it came from the nursery with. I haven’t had to repot it yet, so the dirt hasn’t changed.

You can get fancy and make your own soil mixture for your plants. I’m not very educated about soil composition yet, so I stick to store-bought mixes. The standard houseplant potting soil has worked well for me in most cases. I use either the generic houseplant or cactus/succulent mix, depending on the plant. (So, I’d use the standard kind for my Philodendron Birkin.)

There is one thing I look for, and that’s for the soil to be well-draining. You don’t want it to be so densely compacted that water isn’t able to run through it. Avoid packing dirt into your plant’s pot too tightly, and an additive like perlite can improve drainage.

Philodendron Birkin, like many other plants, falls into that category of liking bright indirect light best. The leaves need adequate light to keep their variegation. If your Philodendron Birkin is not receiving enough light, you may notice that new leaves will be plain green instead of their usual pinstriped pattern.

On the other hand, it should not be in direct sunlight all day. Too much light can scorch or sun-stress the leaves, which is also not good.

Aim for a middle ground and place your Philodendron Birkin in a bright spot that will be out of direct sunlight for most of the day. If you have really sunny windows, you may consider diffusing some of the light with some sheer curtains.

As a tropical plant, Philodendron Birkin will do best in moderate to high humidity levels. To me, this means between 40 and 70%. You won’t necessarily have problems if your house is less humid than this, but it may slow your plant’s growth.

Humidity sensors are definitely not a requirement for owning houseplants, but I’ve found them to be a helpful tool. In one glance, I’m able to gauge the room’s humidity and determine how my plants are doing. You may be able to temporarily increase the humidity around your plants by misting them or placing them in a pebble tray with some water.

My preferred method is to run a humidifier in my bedroom, where most of my plants are. If you have more uncommon or just a lot of tropical plants, you may want to consider a humidifier, but it’s also by no means a requirement.

Where to Buy Philodendron Birkin

In my experience, Philodendron Birkin is a somewhat uncommon plant. You may get lucky and find it at a hardware store garden center, but I wouldn’t count on it.

I found mine at a local nursery, and they didn’t have very many of them in stock. I’d recommend starting at a nursery, but there’s also the option to shop online. Etsy is a great place to buy plants, and there are countless sellers to choose from, such as Hirt’s Gardens or Honey Plant Co. At the time of publishing, both of these sellers had Philodendron Birkin in stock.

How to Propagate Philodendron Birkin

Full disclosure here, I have not tried this! My Philodendron Birkin is still relatively new and small, so I haven’t wanted to take a cutting just yet. These methods are what I have found with some research, plus what has worked for me with many other plants.

Water propagation is done with stem cuttings taken from the top of the plant. Cut the stem so that the top few leaves come off. Let the cutting sit out for a few hours before placing it in water to allow a callous to form over the exposed stem.

Then, place it in a jar filled with water. Empty and refill with fresh water at least once a week, or more often if the water starts to look dirty.

Again, I have never tried it, so I don’t know how long it will take for roots to start growing. Some propagations, like pothos, will have noticeable roots within a week or so, but other plants will take much longer. You can pot the propagations in soil once the roots are at least a few inches long. The roots should be long enough to support the plant outside of water.

This method also uses stem cuttings, and the cutting should include at least one root node. Allow it to sit out for a few hours so the cut can heal a bit.

Place the cutting in a small pot filled with soil. You’ll want to water it more often than established plants, but be careful not to overwater. The soil should be damp but not so wet that the plant will get waterlogged or rot. Pots with drainage holes are essential!

I know that many people have success with soil propagation. However, water propagation is my favorite because I love watching the roots sprout and grow. I don’t have to guess what’s going on with the cutting or whether it has roots yet.

In both cases, new growth should also start on the mother plant near the cut’s location. 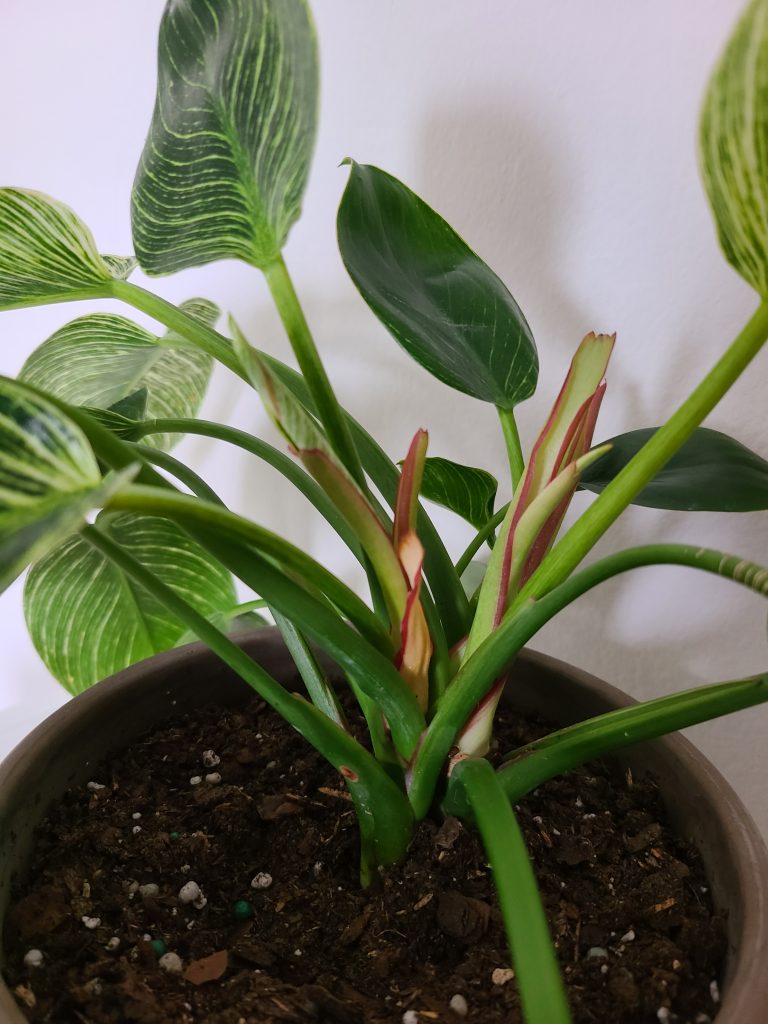 Currently, I have one Philodendron Birkin that I got in November 2020 from a local nursery. I had seen many people talking about them online, and I’m always down for a plant with a cool variegation pattern.

I haven’t had any problems with mine so far (knock on wood!). It has put out two new leaves, which have been brighter and more variegated than the rest.

If you look closely at the photos, you’ll probably see the little brownish spots on some of the leaves. The imperfections suggest that it had some type of pest problem in the past, but it doesn’t seem to have any right now. I’m keeping an eye on it, but I hope that the problem doesn’t return.

Overall, I’m really please with my Philodendron Birkin. It’s a gorgeous plant that has been pretty low-maintenance for me, which is all I can ask for. If you’re interested in other easy-care plants, check out my top 5 plants for beginners.

I’m not sure if or when I would get another Philodendron Birkin since I have limited space in my apartment. I would prioritize getting different philodendron varieties, like a Micans or a Silver Sword, before duplicating this one. 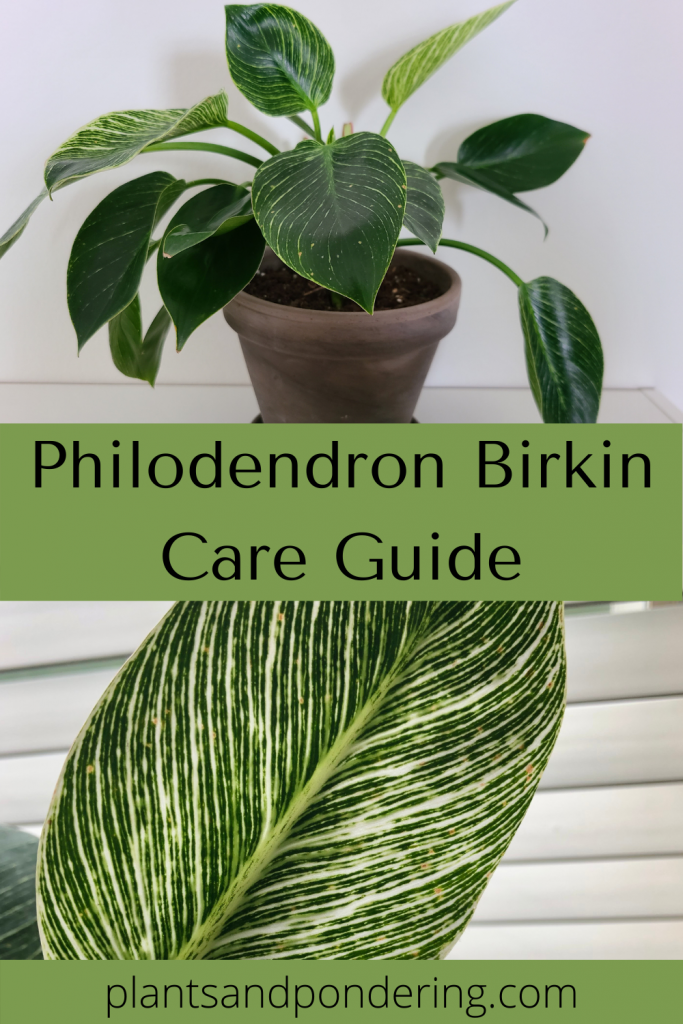 So that covers everything you need to know to get started with Philodendron Birkin care! I hope that this stunning plant brings you as much joy as it has brought me.

Do you have a Philodendron Birkin, or are you interested in owning one? What’s your favorite type of philodendron? Let me know by leaving a comment!