I can’t be the only one who thinks January flew by. We’re already a full month into the new year, and it’s time to reevaluate my goals. I often find that resolutions don’t work well for me because it’s hard to plan for a whole year in advance. It’s much more manageable to break things down into monthly to-dos that compound into a bigger goal. Today I’d like to share my February 2020 goals and how I decide what to focus on for the month.

How do I come up with my goals? How do I choose which ones to work on first?

Sometimes goals are a new habit that I want to start. Other times I’m already doing something but I want to be more consistent and intentional about it. I don’t know if you’ve experienced this, but once in a while I’ll get in a mood where I just want to change or work on everything. It’s easy to get out some paper and bust out a list with like ten different things that could all turn into monthly goals. But I know that if I have that many things going on, I won’t be able to spend much time on any of them. As a result, it’ll feel like I’m not making any progress.

Instead, I’ve found it’s better to narrow it down to three or four goals to focus on for a month, maybe more if some of them are one-time things. Pick the ones you’re most excited to try first. I’ll make a habit tracker that includes the goals that require consistency, and I try my best to check it at the end of every day. For one-time goals, try to also include one or two tasks that you’ve been putting off. Think of how good it’ll feel when you finally get to check that box.

I focus on developing those three habits or whatever they are, and I try to avoid adding extra things in the middle of the month. When the month is over, I have tangible data to reflect on and see which habits were easy to keep up and which ones I lost interest in. For habit tracker goals, I can see how many times I did that habit throughout the month. For one-time goals, it’s usually black and white – did I do that thing or not?

I use that data to inform my decisions for the next month’s goals. What do I want to keep doing? What do I want to put to the side so that I can focus on something new? For me, this has been a good way to balance pushing myself to work on new habits without trying to change too much and overwhelming myself. It’s all about balance!

If you haven’t seen my goals for January, you can read about them in my previous post. If we’re being honest, I kind of cheated because I wrote my goals toward the end of the month, so I had already made some good progress on them. Nevertheless, it’s good to reflect on how the previous month went. Use that to make decisions about the next month. If you made some resolutions in January, I encourage you to do some reflection as well and keep those goals in mind.

Goal #1: Be consistent with yoga

This went pretty well! I’ve been working through Home (link to post), Yoga with Adriene’s 30-day yoga journey for 2020. As of January 31st, I was on Day 19. Not bad considering I’ve always had a hard time doing yoga more than a few times a week. When you start doing yoga regularly, I’ve found that it takes some time to build up enough strength to not get super sore after every practice. For me this is especially true for wrist and arm strength; planks are hard to do!

I was not expecting to get through all 30 days in January, so I’m not disappointed about not finishing. Instead, I choose to put a positive spin on it and be proud of myself for the progress that I have made. I feel stronger already, and the opportunity to stretch and move is great after sitting at a desk all day. Yoga is not a box to check once and be done. I want to make it a lifelong habit.

Another successful goal. In my January goal post, I mentioned wanted to change the way that I budget, but not this month. I did stay consistent with my current budgeting method. My biggest purchases last month (besides things like rent and bills) were all related to starting my blog. I didn’t know that things like domain names and hosting were bought for the whole year at once, but I think I prefer that to monthly payments.

I wasn’t very specific for this goal, but I did keep up with my spreadsheet. My spending was down compared to December, which makes sense because I wasn’t buying any gifts. However, I am fairly new to budgeting so I’m focusing on building the habit more than analyzing every transaction.

I didn’t quite get there in time to launch in January, but that’s fine with me. I’d much rather take my time and have an end result that I’m proud of than rush through things just to launch faster. There’s way more learning to do, but I learned so much in the past month. I did a lot of reflecting; I made sure this is something that I really want to do. I also tried to notice how working on the blog made me feel. Did I feel drained and frustrated afterward? Or excited and inspired? I’m happy to say that I felt much more of the latter. Having this outlet for my creative energy has been more helpful than I anticipated.

In terms of putting in the time and energy, I’d call this goal a success.

If you’re reading this, that means that I’ve finally launched Plants and Pondering! It’s been a couple months in the making at this point, and I’m so close to sharing this with everyone. There are still a few things that I want to sort out before I start putting stuff out there, and I’m trying my best to do things right the first time.

I still haven’t picked a launch date yet, but it’ll most likely be toward the end of the month. I want to have a few more posts stockpiled so that I have a bit of a cushion. Editing a post for SEO can take me a pretty long time! I use the Yoast SEO plugin for WordPress, and it’s been helpful but I’m still trying to figure out what the suggestions mean and how to implement them in a way that sounds natural.

I haven’t set any numerical goals yet, and I don’t plan on it for the first month or two. Any progress is good progress, and it’s better than nothing! I want to focus on the positives and the effort that I’m making above the analytics, at least in the beginning.

I think it’s totally doable for me to finish the remainder of the videos in the Home series by the end of the month. As of the 4th, I just finished Day 20, which gives me the rest of the month to do 10 more videos. Easy!

But above just finishing a challenge, it’s about building the habit of doing yoga into my routine. It’s about pushing myself, physically and mentally, to show up for myself on a regular basis. Not to get too cheesy, but I want rolling out the mat to feel like home.

Sadly, I’m already a little behind on my reading goals for the year. To try and catch up, I want to finish two books this month. I haven’t picked what they are yet, but I should get on that soon. I started a book at the beginning of the year that ended up being my book for all of January because it’s a 600-page monster lol. This one is fairly straightforward with a definite pass/fail. Let’s see how it goes!

Goal #4: Go through my emails

This is the first checklist goal that I’ve set for the year. There was a time when I’d go through all of the emails in my personal inbox once a month and do a quick purge. Anything that wasn’t relevant anymore had to go. Things like expired coupons or sales, shipping notices for packages that I’ve received, old newsletters that I’ve read.

I know this isn’t necessary, but when you have a limited amount of iCloud storage, getting rid of old stuff can really make a difference. To make things less overwhelming, I only look at emails from the past month. (Which obviously makes more sense if you keep up with it every month) Then around the end of the year, I’ll do a bigger purge that goes back further in my archives. It doesn’t take very long to do, and it gives me the satisfaction of doing some digital decluttering.

As you can see, I’ve set 4 main goals for February 2020! It’s all achievable if I spread it out and give myself a reasonable amount of time to get through everything. I know it’s tempting to try and just get through everything in one week or a weekend, but sometimes it pays to be slow and consistent.

What are your goals for February? How are they going so far? Let me know by leaving a comment below! 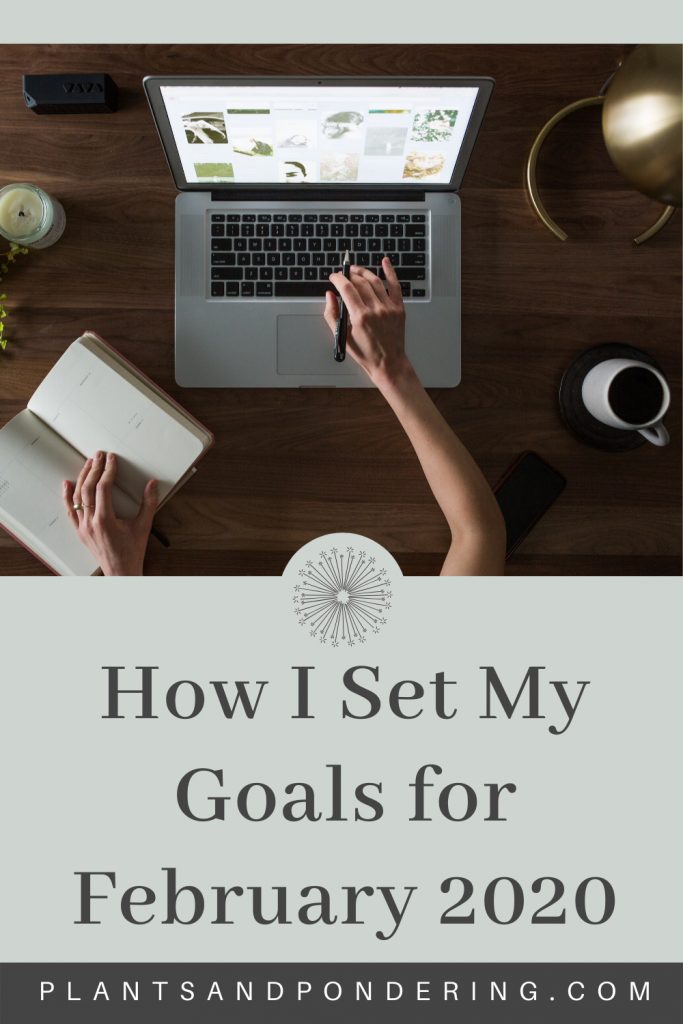